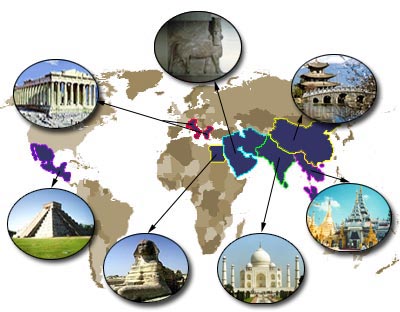 WH.2.2 Examine the development of Judaism and the civilization of Ancient Israel, including the origins of monotheism, the significance of the Exodus from Egypt, the Hebrew Bible and the Ten Commandments as the source of many moral and ethical traditions of Western civilization.
WH.2.3 Examine the development of Greek civilization including differing political and social structures as well as conflicts such as the Persian and Peloponnesian wars. (Sociology, Economics, Government, Geography) 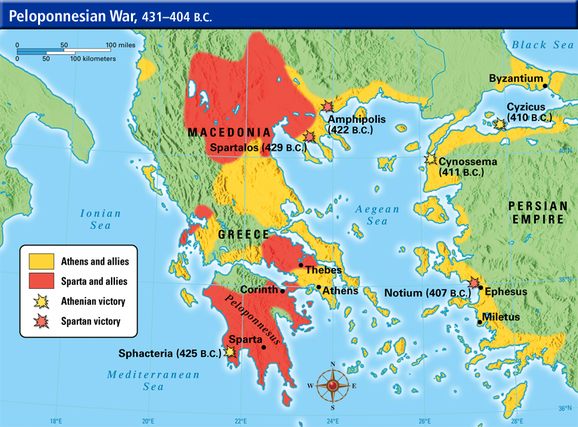 The Peloponnesian War pitted Athens and their allies with Sparta and its allies. In the end, Sparta became victorious but the long war weakened the Greeks so much that their neighbors to the north, the Macedonians, will conquer them.
WH.2.4 Describe the rise of Alexander the Great and the influence of Hellenism in Southwest and South Asia, North Africa, and parts of Europe.
WH.2.5 Analyze the development of Roman Republican government and society. (History, Government, Sociology)
WH.2.6 Trace the changes that culminated in the end of the Republic and the formation of the Roman Empire.
WH.2.7 Examine the origins, rise, and spread of Christianity including the life of Jesus, and Christianity’s impact on the Roman Empire. (Sociology)
WH.2.8 Analyze the causes, conditions, and consequences of the decline and fall of the western part of the Roman Empire.
WH.2.9 Examine the significant achievements of the Greeks and Romans and their impact on the modern world. (Individuals, Society and Culture)
WH.2.10 Trace the development and major achievements of civilizations in India such as the Mauryan and Gupta empires. (Geography, Sociology)
WH.2.11 Compare and contrast the influence of Hinduism and Buddhism on civilization in India and Buddhism’s spread throughout Asia. (Psychology, Sociology)
WH.2.12 Compare and contrast the influence of Confucianism, Taoism, and Legalism on East Asian civilizations. (Sociology)
WH.2.13 Trace the developments and achievements of the Qin and Han Dynasties. (Government, Sociology)
Powered by