Standard 3 Major Civilizations and Cultural Interactions: 600 to 1300 CE
Students trace the development and interactions of major civilizations and empires in different regions of the world from 600 to1300 CE
WH.3.1 Analyze the impact of trade networks such as the Silk Road and Indian Ocean trade network.
WH.3.2 Explain the rise and achievements of the Byzantine Empire. 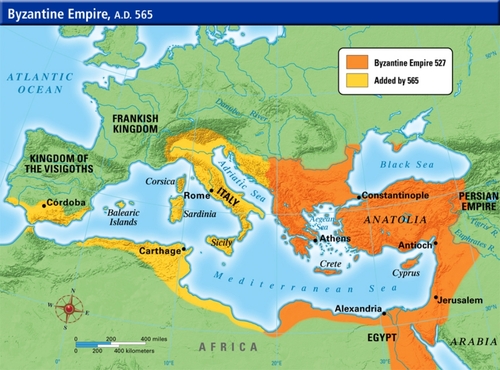 WH.3.3 Explain the division between the Eastern and Western branches of Christianity as a result of the Great Schism of 1054.
WH.3.4 Examine the origins, rise, and spread of Islam including the life of Muhammad, and Islam’s division into the Sunnis and Shiites.
WH.3.5 Trace the spread of Islam and its impact throughout Southern Europe, Northern Africa and Asia.
WH.3.6 Explain the role of Christianity as a unifying force in medieval Europe.
WH.3.7 Describe the rise and achievements of Charlemagne and the birth of the Holy Roman Empire.
WH.3.8 Analyze the consequences of the fall of the Western Roman Empire and the development of feudalism and manorialism on Europe.
WH.3.9 Explain the cultural, political and religious causes of the Crusades and their consequences for Europe and Southwest Asia, including the growth in power of the monarchies in Europe.
WH.3.10 Describe the improvements in agriculture, the growth of towns, and the commercial revival during the Middle Ages.
WH.3.11 Examine the key achievements of civilizations in Africa prior to European contact.
WH.3.12 Compare and contrast the developments and achievements of the Maya, Aztec and Inca civilizations.
WH.3.13 Explain and understand the achievements of the Tang and Song Dynasties.
WH.3.14 Describe and explain the rise, expansion and decline of the Mongol Empire and its consequences for Eurasian peoples.
WH.3.15 Examine the development of feudalism in Japan and its impact on Japanese society and government.
Powered by